Chris has spent 25 years in television news, anchoring at affiliates in Indiana, Kentucky and currently, FOX and KWGN here in Denver.  He’s won 8 Emmy awards for his reporting and hosting.  After 8 years as host of the “Everyday” show on Fox31, Chris is now moving up to the morning anchor and KWGN “Daybreak”, weekdays from 4:30am – 9:00am on Channel 2.  When he’s not working on camera, he’s on stage.  Chris is a seasoned improviser, having trained at Chicago’s famed Second City, and performing with troupes around the country.  Chris will be learning salsa dance while participating in Anchor Center’s “2019 Dancing with the Anchors” fundraiser.

P.S. Young Chris might truly be the world’s BEST at The Vogue.

Angelica has vocal, instrumental and dance background. She had the opportunity to choreorgraph for and teach her previous hip hop dance team before joining Arthur Murray in 2009. Her dedication and enthusiasm shines through all of her lessons. Like all of our instructors, Angelica is well versed and certified in ballroom, latin, swing and country western dances. Angelica is our new student counselor and will assist with all of our new students planning and dancing dreams.

I’ve always had two left feet.  I can’t think of a better cause or a more exciting night to change things forever.  I plan on having two RIGHT feet! ;) 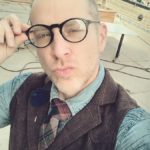 Look at Chris performing these perfect La La Land moves. After seeing his awesome execution of this routine, we can't wait to see him perform the Salsa at Dancing with the Anchors!

Chris is already NAILING his moves! Take a look at his first practice with Angelica, as he learns the Salsa.

How does it work?

Vote for Chris and Angelica Now!

VOTING WITH YOUR DOLLARS BEFORE AND AT THE EVENT WILL DETERMINE THE WINNING TEAM – i.e. the team that raises the most money for Anchor Center, wins the competition, and the coveted Mirror Ball Trophy! Voting dollars are a charitable, tax-deductable donation benefiting the children and families of Anchor Center…and a fun way to support your favorite dance team.

IMPORTANT: Your contribution to Anchor Center for Blind Children qualifies for a 50% Colorado Child Care Contribution Credit on your CO state taxes. Example: give a $50 gift, get $25 back!

Chris and Angelica have my vote!